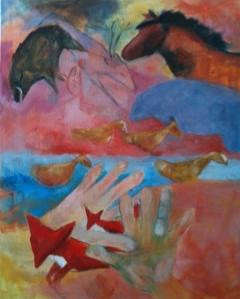 My first novel is now available on Amazon.com at this link http://amzn.to/1f9ERLH  or just copy   Cave Dreams by A.R.Donenfeld-Vernoux  into your browser.
“Cave Dreams” is the story of an unlikely meeting between Aldo, the last survivor of a clan hidden in the mountains of Corsica for thousands of years, and Lenya, a modern woman raised in New York City, trying to recover from overwhelming grief at the loss of her husband in an accident.
Aldo comes from a culture unbiased by modern life, technology, religions, wars, and civilizations; from a time when god was a woman and sex was holy.  He was trained in the rites of sacred sex and the belief that giving pleasure to his mate is the highest honor and power he can give to his goddess.  Now he is alone, searching for the woman with whom he can complete the mystic circle of life.
Can Lenya overcome the prejudice and arrogance of each civilization: the belief those who came before have nothing of value to pass along.  She is a grown woman, is it too late for her to understand another way of thinking, to explore and glory in her sensual side?
This author believes “Fifty Shades of Gray” is one of the most important books in recent years because it opened the discussion into female sexuality, a topic hidden in the shadows for generations.  The HBO series “Masters & Johnson” has taken up the cause with it’s own slant, another crack into the secrecy of the subject.
“Cave Dreams” follows two people from opposite spectrum of  civilization, beliefs, and culture, further separated by thousands of years of experiences.  To each, sexuality has very different meanings.  What could possibly happen?