Yesterday I gave myself a manicure. Most of the time I take my hands for granted, forget they are the implements of my life, allowing me to create, survive, love, and often express without words my innermost feelings through touch. But yesterday, I really looked at those appendages at the ends of my arms. My digits are bent and twisted now, age has taken its way with them, but after some consideration, I decided they are more beautiful than ever.

When I was a little girl, my hands first grew out of proportion with the rest of me. There are photographs when I was twelve, wearing a navy suit and white gloves, the cotton kind with the seams held together on the outside with tiny stitches. My hands are so big in front of the navy suit my sister said I looked like Minnie Mouse. There was a period growing up when I used to bite my nails, keep them behind my back, or sit on them so no one would notice how big they were. But, as time often has it, I grew into my hands. Stopped biting my nails, learned how to groom them and keep them properly clean, then decided they were just right after all.

Once reaching maturity, I became proud of my hands—large for a woman, long fingers, veined, and very strong. Their look sang melodies of sensuality, capability, and finesse. Each night I followed my mother’s almost religious practice—before bed using hand cream.

Living in New York City, I learned never to go outside in the winter without leather gloves. I didn’t want my hands red and raw looking from the cold, no, I wanted them smooth, sensuous, soft—the hands of a well cared for woman. Those big hands could carry large rings, diamonds, gold, elegant sculptures in precious metals requiring a large stage to display their artistry.

The scars are many, like the time I sliced my hand while making lunch for my husband in the galley of our yacht. Not a smart thing in a storm. When I came on deck trailing blood, he almost fainted. Another scar resulted from leaving a knife, blade up, in a dish drainer, bad move I’ve never repeated. The other various nicks are so plentiful, I’ve forgotten how most were acquired.

The bump on the left hand index finger is from taking copious notes in college, then law school for two degrees. The bumps on the right hand index and second fingers come from use over thirty years, beginning in the days when my first computer used two big floppy disks, one for programs, the other for data and then on to the facility of the mouse.

To my initial horror, I watched the slow changes to my beautiful hands. First the bumps on knuckles started, next the fingers twisted and turned of some inner volition of their own over which I had no control. It was a slow decline, years in the making. Recently, I noticed one finger had decided to take its own path, heading west instead of remaining straight. The next neighboring digit then accommodated by snuggling up against the runaway.

Now I like the way they look in all their gnarled beauty, in fact, I find myself proud once again of my funky phalanges. Each bump, twist, turn, crook and lump is another chapter in the story of my life. Like the Andean tribe in South America who left their history written in quipu, or knotted strings, I think of my fingers the same way. I can look at them and read the memory of times, places, events of my life in every one. And who can deny the beauty in that? 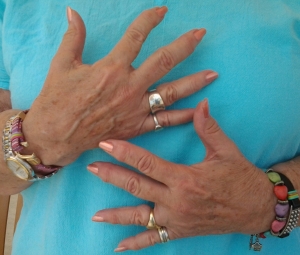 One thought on “The Beauty of Hands”